It’s been a busy week so far, what with TechWeekAKL in full swing across the water at GridAKL and the Tripartite Economic Summit drawing to a close after a “hugely successful” (in Len Brown’s words) two days of intense talks and networking at the Viaduct.

The People in Tech talk at TechWeek caught our eye.  Hosted by veteran publisher Vincent Heeringa (of Idealog mag fame, among other things), the panel boasted a stellar line-up, including Lillian Grace, founder of “data democratiser” Figure.NZ;  Shaun O’Donnell, rocket scientist from the Rocket Lab; Robert Amor, computer science guru from the University of Auckland; Che Tamahori, digital design guru and co-founder of Shift (now DAN); and Ruth McDavitt, champion of the Summer of Tech initiative and proponent of diversity in tech.
The framework 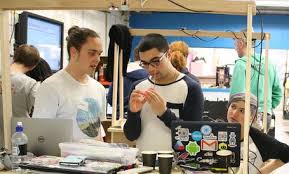 of the discussion was around the skill shortages and talent pipeline within the Auckland tech industry, and honed in on how we can equip the next generation people of tech for the future we need to build.  We heard that passion and tech is a powerful joint force — you can combine pretty much anything you like doing with tech — but that tech is a team sport.  Coders need to communicate with more than just their keyboards.  We heard about how remote friendly vs remote first works for some, but not others, and how Post-it notes are the new currency of paper-based offices.  And curiosity is king!
Find out more about what’s going on the rest of the week here